I’ve been here every day, experiencing  every moment, yet still it’s hard to believe my baby is nearly a year old. Finn is walking more and more, beginning to talk a bit (he clear as day said “yes” when I asked him if he wanted more milk last night, and “mama” is a regular), he’s learned how to tell me when he doesn’t like something, and his wonder of the world around him only grows. I know that he has a lot more growing and developing to do, but his milestone quilt is nearly finished.

I had to laugh to myself a bit a few weeks ago when Finn threw his first fit. You know the kind, where he gets his hands on something he really shouldn’t have (in this case, a pony bead that he surely would try to eat), you take it away, trying to distract him with something else, but still he whines, arches his back and makes it known that he is NOT happy. My first thought was, “Awww cute! Finn learned how to throw a fit!” True tale sign he’s my third child. While it’s still a bit cute when he throws a fit, I’m sure it will get old long before he outgrows it. But still, he’s such a blessing. Looking at these photos, you’d never think he’d be capable of throwing a fit.

Now that walking and moving is old hat for Finn, this photo shoot was quite a feat. Just about as soon as I set him down standing, he’d start to walk toward me. Adorably cute, yes, but jolting movement doesn’t bode well for clear photos. Still I managed to get a few good ones, and of course I’ll be sharing them here.

This month, we had some friends over during his photo shoot (which actually happened this morning!), so his friend Ronin joined him for the photos. Ronin is a few months younger than Finn, but it was fun to see them interact.

Here I was asking and signing to Finn, “Where’s your friend?” I’m trying to sign all the time to Finn and it’s slowly starting to show. He finally signed “more” while eating eggs the other morning, and I think is beginning to sign “milk” and perhaps “all done”. He seems much more interested in verbal communication, and it sounds to me like he says: mama, milk, more, Maddie, Max, water, yes, and perhaps a few more. The development of a human brain blows my mind. 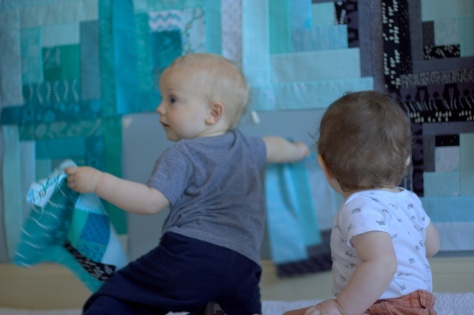 Once again, the highlight of the day was ripping the blocks off the wall. Here Ronin looks on as Finn takes the first block down, and turns to check with Emily (Ronin’s mom) to make sure it’s ok. 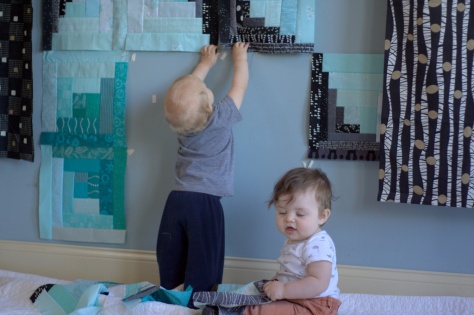 Once I gave them the go ahead, it was a quilt block grabbing, tasting, throwing free-for-all.

As you may have noticed in some of the photos above, I recently found potential backings for Finn’s milestone quilt. While doing a bit of quilt shop hopping during Maine’s April quilt shop hop, I spotted two prints that stuck with me at Mainely Sewing. After walking through the shop, I found myself coming back to these two.

They are by Stof Fabrics, which is a fabric company unfamiliar to me before now. The fabric feels sturdy and smooth, and based in Denmark, I anticipate high quality. After much deliberation, I bought a couple yards of each print, just in case. I haven’t seen them elsewhere, so I thought it was a wise purchase. 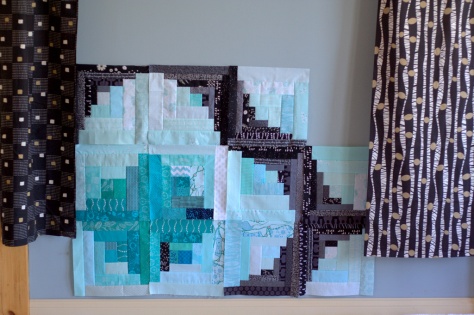 To be honest, the print that looks like birch trees was the one I thought I’d use for the backing, until seeing them hanging next to the quilt. Looking at the photo above, I’m leaning strongly toward the print on the left. I love the pops of gold in both of them, since some of the fabrics I used in the quilt blocks for the front have gold details, and the square geometric pattern reflects the log cabin structure. I can see this quilt coming together, and it’s such a fun sight! 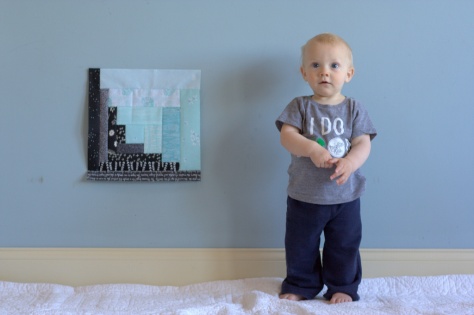 I deliberated over which photo of Finn to use for his 11 month block photo, since this one of him carefully standing is pretty adorable, but I ultimately chose the one with him leaning over, peeking out into the kitchen where Emily and Max were talking.

This photo seems relevant to his stage of life right now–wanting to get into the mix, discover everything, and communicate and run with the big kids. He’s getting awfully tall, too! One more month before he’s a one-year-old! I’ll check in again next month to share the celebration.

For those of you new to this project, you can see the full quilt layout plan, HERE in the 3 month post. You can see the full progression of Finn and his quilt’s growth so far HERE or by clicking the “Milestone Quilt” tab at the top of my blog. Thank you for joining me on this journey!

This site uses Akismet to reduce spam. Learn how your comment data is processed.