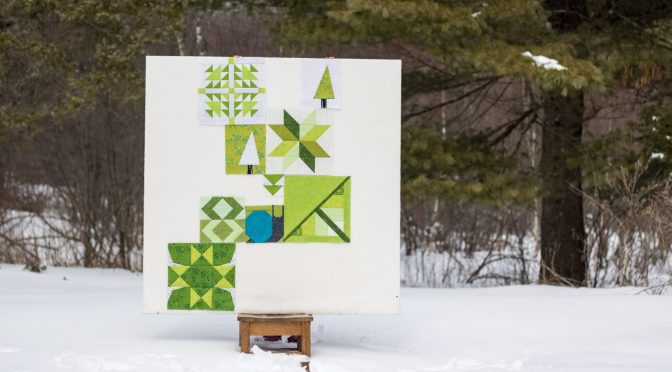 My greenery quilt is slowly growing, despite the fact that I haven’t been sewing all that many new blocks for it over the past month. Between travel, deadlines, and other quilty projects, the greenery block making has dwindled a bit. I’m sneaking two more blocks in this month, but you’ll have to wait just a bit for those reveals! It’s just another reminder of how perfect of a project this is for me–no stress, no worries! I make blocks when I can, and the quilt will grow as it grows!

I haven’t shown much of an update here, so I thought it would be a good time to show you the blocks I do have! I brought my portable design wall right out into the blizzard aftermath, since with all of this white, I thought some green would do it good!

There really aren’t a whole ton of blocks yet, but I’m including blocks from a few different sew-alongs and bees. Here’s a tour…

52 Weeks with the Quilter’s Planner Blocks (with a cameo from the Garden Snail Snail Paced Sew Along hosted by Angie @ Gnome Angel):

Unnamed by Jane Armstrong, from the first week of January in the Quilter’s Planner 2017. I started off on the right foot at least! Not one bit of the final layout for this quilt is decided yet, except that this little snail is going to live next to this lovely upward ramp! They seem to go together, and so it shall be.

Doves in the Daylight by Michelle Bartholomew, from week 2 of the year. Gosh, I love this block! 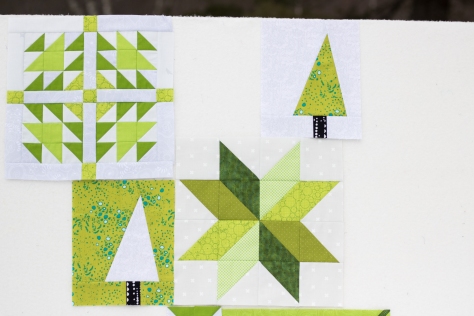 The little improv trees are what kicked off this Greenery quilt, and they were a Wild Card to help get us started with Molli Sparkles’ Honey Pot Bee. Pssst…. I’m a Queen Bee for April, so I’ll be adding another block to the mix soon. You’ll just have to wait and see which block! 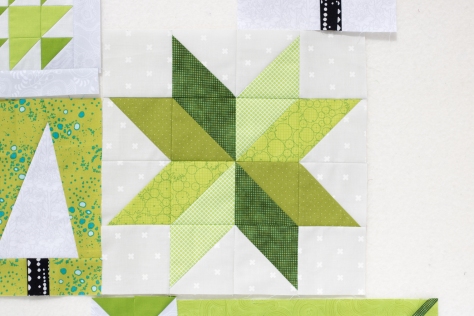 Starflower block, tutorial by Ellison Lane, the January block thrown into the honey pot by Molli himself!

This is Patience Corners, block 1 for the Sewcial Bee Sampler led by Sharon Holland and Maureen Cracknell. I’ve only completed one block from the Sewcial Bee so far, but I love the classic simplicity of these blocks and plan to make quite a few more (as soon as I finish my round 2 Quilt Theory quilt–my big deadline at the moment!)

And all together now, in the snow, since what better time to spread some greenery than a mid-March blizzard!? Per a suggestion by Anna from Mod Quilt Mom, I’m naming my quilt “It’s Easy Being Green 17” since it’s all about greenery and will be comprised of blocks made in 2017. I still might edit it a bit, but for now, the hashtag is #itseasybeinggreen17quilt on Instagram.

No child-assisted blog post of mine would be complete without a hi from my helper, so here’s a quick photo of my adorable helper today (this is for you, Mom aka Grandma)! Maddie had a snow day, and Max, who goes to preschool just a couple towns over, had school as usual. Isn’t it wild the difference a couple towns can make regarding snow in rural Maine!? So today is a fun Maddie-Mommy-Finn quasi-snow day!

With a bit of growing greenery thrown in, since spring MUST be around the corner! 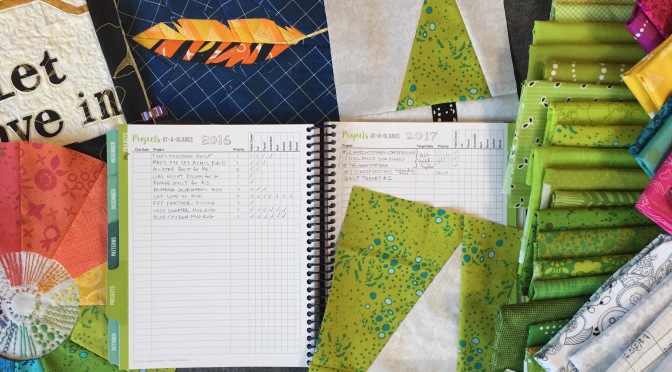 In my style, I’ve well missed the 2017 Planning Party hosted by Yvonne at Quilting Jetgirl, but I thought I would write a quick post with my 2017 Goals and word for the year, both to share my focus and to hold myself accountable!

I’ve been thinking long and hard about what I want to focus on this year, and I’ve decided that I really need to make my mantra: “Finish What You’ve Started”. I have ample projects that were begun with excitement and then quietly forgotten before reaching completion, and I also branched out into a few other big new endeavors in 2016, such as pursuing quilt photography work and designing for Quilt Theory. I’ve been helping Stephanie with the Quilter’s Planner Instagram account, and that has been extremely fun but also takes time. I also have a few potential teaching opportunities that I’m excited about in the coming year. Combined with being a full time mom of three little ones, keeping house, tending chickens, and in the proper season, gardening and adventuring along the coast, my plate is pretty full as it is. So it seems right to set my engine for steady on and just keep plugging away in the direction I’m going.

That said, I also recognize that there’s no way I could go a full year without trying anything new. For that reason, I also plan to participate in a few Sew Alongs and a Quilt Bee, as I outlined in my last blog post. The relaxed, no-stress mentality will let me fill those block making moments in between my “finishing” so that I can stay fresh and excited about making. I also plan to play along more regularly with the #beesocial prompts, since they stretch my creative spirit more than anything else I’ve encountered. I’m already beginning with Stephanie from Spontaneous Threads’ first prompt for January–Resolution. Watching the video she included as part of her design inspiration prompt reaffirmed the word I selected to guide my year (I definitely recommend clicking over to her post and watching the video. It’s well worth 5 minutes of your time.)

Which brings me to my “one little word”–the one word to guide my year. 2017 will be my “green” year. There are so many influences to my selection of this word, from my lifelong love of nature, my degree in environmental science, to all that’s been happening in the world around us. Sparked initially by Chawne Kimber’s quilt “The One for Eric G”, the first statement quilt I saw that made me hold my breath as my stomach took a nosedive, and made me realize that this amazing craft can be used to inspire positive change (more than just making the world a more beautiful place one stitch at a time), further melded and inspired by the Make Do Quilt challenge posed by Sherri Lynn Wood last year, and always continuously inspired by Hillary from Entropy Always Wins and her focus on using reclaimed textiles in her creations, I have decided on “green” as my word of the year and “finish what you’ve started” as my guiding mantra.

I love how Cheryl from Meadowmist Designs set measurable steps for herself in her goal setting post, so here is my attempt at the same. This year, I will try to:

Phew, I’d better stop there. I think this is a great start to my goals for the year, and I’m curious to see how successful I am at meeting each of these goals. Note that I have not included pattern design in my specific goals this year. Aside from Quilt Theory patterns, two of which I plan to develop and release this year, I am letting pattern writing be more relaxed this year so that I may focus on my other goals. It doesn’t mean it won’t happen, though!

So far I’m off to a decent start and have made good progress on one WIP (Max’s Eye Spy Picnic Plaid), and have finished another, which I’ll share later this week. (Note that I’ve added quite a few old WIPs to this list since this photo was taken).  I’ve begun to play with the #beesewcial prompt, and am incorporating repurposed textiles into it! Baby steps!

I hope your year is off to a great start!

I’ll be linking up with Sew Fresh Quilts’ Let’s Bee Social so that you can all hold me accountable this year!

Ahh, spring! Color is everywhere, sun is slowly warming the soil, and the world is coming back to life. Spring is my favorite season, until summer comes along… and then fall with the crispness and the gorgeous leaves, followed by that first gorgeous snow that makes me love winter. I guess I’m just grateful to live in a place with clearly defined and vastly different seasons. The constantly changing environment keeps the wonderment fresh.

Today’s color inspiration is again from my garden, with color palettes made using Play Crafts‘ wonderful Palette Builder 2.1. The matching Kona & Bella solids and Aurifil thread is also a perk of the palette builder–if you haven’t tried it, I would definitely suggest taking a moment to make palettes out of your favorite photos. It might change the way you see the world–or do you already see the world in fabric and thread?

On a whim, I did a quick google search for green after creating this palette. I felt like this photo and resulting palette said so much, yet I couldn’t quite put it to words. An interesting website on color psychology pretty much nailed my sentiment. Green…

This is the color of balance and harmony. From a color psychology perspective, it is the great balancer of the heart and the emotions, creating equilibrium between the head and the heart.

From a meaning of colors perspective, green is also the color of growth, the color of spring, of renewal and rebirth. It renews and restores depleted energy. It is the sanctuary away from the stresses of modern living, restoring us back to a sense of well being. This is why there is so much of this relaxing color on the earth, and why we need to keep it that way.

There’s much more reflection on the color green here, if you are interested.  Maybe I need more green in my fabric stash?

Ahhh, finally some more color! I love this range of oranges, with a nice anchoring dark green and a splash of Pickle! How can you go wrong with Kona Pickle?

Here’s just one more photo to share the smooth silkiness of the tulip petals. This palette would make a fabulous spring quilt, perhaps with some added low volumes. Simple, cheerful, full of new life.

Green, I need green! While the weather has been warming and mud season is almost officially upon us (yes, it’s a real season in Maine–it falls right between winter and spring), there is still a dire lack of green or signs of new life out in the world around us. So today I gathered all the green life I could find and had a little photo shoot. Sure, they are potted, but here is some springy green and life-filled color for your inspiration pleasure. Color palettes are created using Play Crafts’ Palette Builder 2.1 and my photographs. 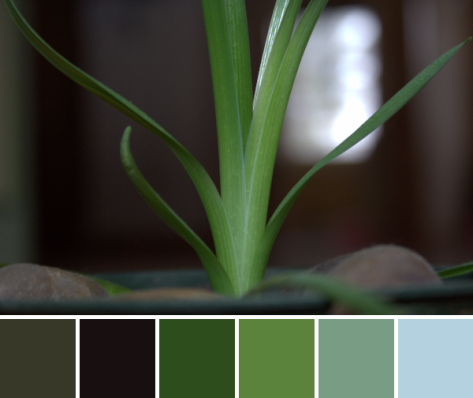 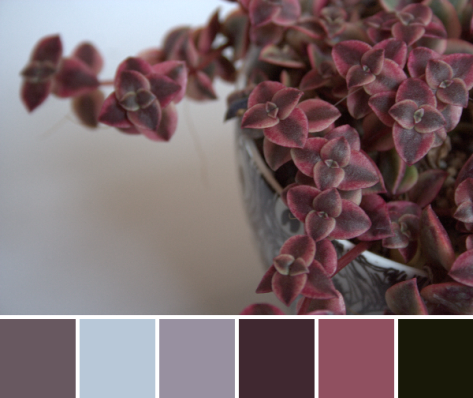 This may not be green, but it’s alive and beautiful. This lovely succulent is on top of the trends, since I dare say it’s sporting the lovely Pantone color of the year, marsala. Am I right? Even if there isn’t a solid that matches perfectly, I think if you mix Bella Peacoat with Bella Brick Red, that would land nicely on Marsala. 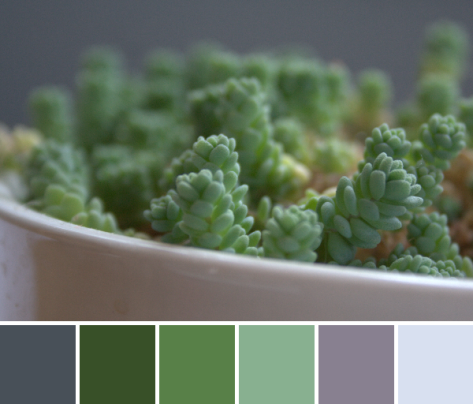 Glorious green. This succulent has seen better days, but I’m hoping that once the sun begins to shine more regularly, the temperatures warm, and perhaps I figure out the best succulent watering schedule for success, it will shine. I’m sure of it. For now, it offers promises for the days to come where green sprouts will be all around us!

Did anyone else notice that despite all the life in these palettes, “Arctic Sky” or “Arctic Ice” made an appearance in every palette!? I just have to laugh at that!